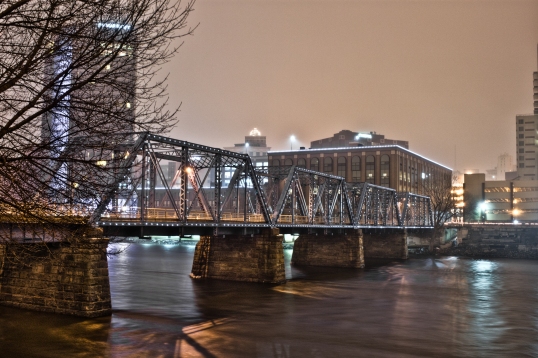 Despite the misty weather, and running the risk of exposing the camera to some serious moisture I made the trip downtown to shoot it in a different light, or lack there of, than I normally shoot. The city wasn’t as alive as I had hoped for on a wednesday evening. Never the less I made a quick trip around the outskirts to observe the scenery in its misty haze. I decided I would shoot for some HDR shots to really bring everything to life, and with the repeatedly long shutters per bracket it only allotted for couple of scenes to be captured, most of which were ruined by the massive amounts of water that would accumulate on the lens. Lucky enough this was one of the shots that actually turned out.

With a good deal of detail available in the image it was an enjoyable playground working in lightroom and photomatix. I really wanted to bring this image to life, blurring the line of between photo and reality. After a good deal of time with minor tweaks I enjoy the resulting image. It has a painterly quality resulting form the large aperture, while at the same time acting as its own pop-up book, drawing you into the various mini scenes available.

It was actually a rather warm and enjoyable night, even with the misty wet fog. My good friend Hogan (from the shadow on the wall post), made the trip downtown with me and took some interest in the camera this time. He enjoyed peering through the view finder to see the scene through the lens. I tried my best to explain to him why the long shutter speeds and multiple shots. Despite the many ruined exposure from the moisture the night was still very enjoyable and I am pleased with the end results.